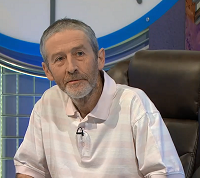 Phil Hulme was a contestant in Series 8 and an octochamp in Series 82. He is a Retired Highway Attendant from Middleton in Manchester. He became an Apterite after recording.

Making his second debut against Steve Agace, Hulme won with a strong 99-point win. Hulme then put in seven more victories with five more scores in the 90's. In his eighth game, a spot of the nine letter word DELATIONS earned him his first century and he became the fourth octochamp of the series with a total of 789 points. He will therefore likely return for the finals later in the series.