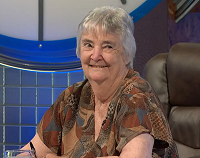 After losing by one point in Series 24, it was revealed that Barbara had JIBER disallowed, but it was listed in the dictionary under GIBE, so Barbara was allowed another go, but she lost by 15 clear points that time around. Wylde returned for a third time in 2019 during Series 81, however she was overpowered very early on by her opponent Jamie Wing aka "The Human Dictionary", with a spot of the nine letter word SOMATISED in the first letters round.