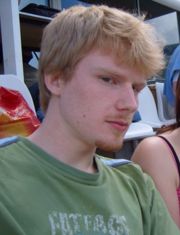 In the final, he faced Steven Briers. Reams started with LEPTON while Briers has OPULENT for seven. Briers maintained this lead until he had REENACT disallowed. Briers then took the lead, first with SNOOZED, then another seven points when Reams went wrong on the numbers. A seven, a six and a five for both players meant that Reams had to beat Briers on the final numbers game to force a crucial conundrum. However Reams declared nothing, and Briers declared 5 away. Briers had won the tournament, and just the conundrum remained. The conundrum was ELITEBOUT. Briers first buzzed in with LIBOUETTE which was wrong, and then comically Reams buzzed in with GANDISEEG, referring to Richard Brittain's guess at the conundrum in the first round. His own record of his experience on the show can be read on The Countdown Page here.