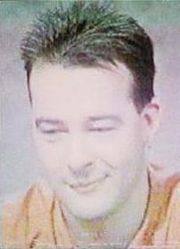 A young Damian in the days when he was still just a contestant.

It would not be an exaggeration to suggest Damian Eadie (born 15 August 1969, Blackpool, Lancashire, England, UK) is one of the most important people in the Countdown world. Originally a contestant in Series 28, Eadie spent so much time in the Yorkshire Television studios that he was offered the chance to be a researcher on the programme. From there, he rose through the ranks to become Series Producer.

Eadie's debut on 12 July 1994 saw him defeat Emanuele 'Spud' Grillo, with a further 5 victories following. His run would end at the hands of a determined Suzanne Miles in his seventh game. Nonetheless, this was enough to ensure he returned for the series finals.

Returning as #3 seed, Eadie met Chris Hawkins in the quarter finals, and in a close encounter Eadie was able to compile a 1-point win, 44 – 43. This set up a match with Gregg Magee for a place in the grand final. Eadie had an easier time of it this game, putting together a 59 – 37 victory. The final against Wayne Kelly was a close affair, both players getting a niner in DISRUPTED, both players taking small leads at various points but neither being able to pull away. With Eadie leading by 1 point, the 2nd football-themed conundrum of the afternoon (LETISSIER) was unscrambled to STERILISE by Eadie after 15.5 seconds and with it came the title of champion of Series 28.

After a 3 month break for the 15-to-1 series, Eadie played in the first match of the new series, which kicked off with Championship of Champions VII. Andy Bodle was the opponent, which saw yet another close game. This time Eadie pulled out the win by just 2 points. He was given a chance to get revenge on Suzanne Miles in the semi-finals, a chance he duly took, winning 59 – 35. The grand final saw Eadie up against Don Reid. A phenomenally even-matched game saw just the first conundrum separate the two players after the first 11 rounds, leaving Eadie 10 points in arrears. In round 12 Eadie made the first real mistake of the game, offering the invalid moilers ☓, handing 7 more points to Reid. An impossible numbers game settled the match, with Reid mopping up the last conundrum to win 100 – 73 in a game much closer than the scoreline suggests.

Eadie next appeared in the Supreme Championship,where he was drawn into Group F. An opening game against Janet McRae proved no problem, the result being 62 – 38. Julian Hough was next, with a tighter scoreline of 52 – 46 again going Eadie's way. Hilary Hopper stood between Eadie and the overall quarter finals, but this time he lost, going down on the crucial conundrum DEBAUCHED by 59 points to 40.

He next made an on-screen contribution on 5th January 1999, taking the role of lexicographer. Between Series 40 and Series 48, as well as special editions, he made 230 appearances in this capacity. In Series 44, Eadie also filled in as the celebrity guest when the booked celebrity failed to appear. By his own admission, he hated this appearance, so after 3 shows Richard Whiteley's partner, Kathryn Apanowicz, was brought in as a proper celebrity.

Eadie has since co-authored several puzzle books and a behind the scenes guide, and can regularly be seen on the C4countdown message group whenever Chris Wills makes an overly-suggestive comment.