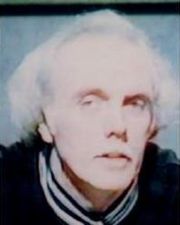 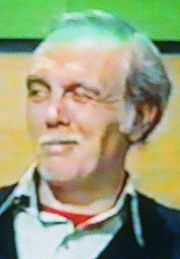 Corr gives Lindsay Denyer a crafty wink after defeating her in the semi-final.

Eugene Corr, known on Countdown as Gino Corr, was the runner-up of Series 19 and Championship of Champions V, as well as a participant in the Supreme Championship. He was a mature student from Aberdeen in Scotland who had previously worked in the oil industry but then worked in management.

He won four games towards the very end of the series, but lost the final heat game of the series to Duncan Dale-Emberton. Nonetheless, he returned for the final rounds as #5 seed, beating Maureen Harmer and Lindsay Denyer on his way to the final. He lost the final, however, to Michael Wareham.

Corr's performances, not to mention his near-legendary wit and personality, saw him return for Championship of Champions V. There, he beat Jonathan Anstey in the first round and went on to beat Lawrence Pearse in the semi-final, in the process making the most famous letters declaration never to be shown on Countdown, as can be seen here. In the final, Corr lost a close match to Irish wunderkind Tim Morrissey.

On 9 March 1995, the conundrum was GINOCORRD in reference to him.

Corr returned for the Supreme Championship in 1996. He was assigned to Group D and faced Steve Balment in the first round. Corr took a 15 – 0 lead after two rounds with the words CANAPES and DILUTION. However, he went on to choose an unusual selection of 3 large numbers and it backfired on him as Balment got closer to the target than he did. A crucial conundrum was necessary, but Corr could still win unless his opponent solved it. MENTALDIP was turned over and Corr buzzed after only one second, but got the answer wrong. Balment went on to correctly guess IMPLANTED, ending Corr's Countdown career.