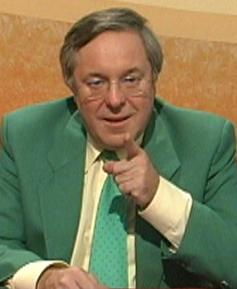 John Richard Whiteley, known on television as Richard Whiteley (28 December 1943 - 26 June 2005) was the presenter of Countdown from its inception in 1982 until his death in 2005. He was the first face on Channel 4 and, with over 10,000 television appearances, he accumulated more broadcast hours than anyone else in the history in British television. He became an OBE in 2004.

Richard started his television career as a newsreader, and from 1982 to 1995 performed both as the Countdown host and as a Calendar (News) newsreader on Yorkshire TV, earning him the nickname "Twice-nightly Whiteley". In 1982, he hosted the short-lived Calendar spin-off Calendar Countdown, which in turn led to Countdown itself on Channel 4. He gave up newsreading in 1995. In 1997, he appeared as a contestant in a Christmas special against co-presenter Carol Vorderman. Due to his links with Countdown, he appeared on Star Spell in 2005, a programme that tested celebrities on spelling, which he won.

He appeared as the presenter in every single edition of Countdown prior to his death, and all but one of these was as the host (the only one he didn't host was the Christmas special, where he was a contestant). In addition to 3,959 regular episodes of Countdown, he presented all the Calendar Countdown shows, all the Countdown Masters programmes, and all the special episodes, thus totalling over 4,000 appearances, currently third only to Susie Dent and Carol Vorderman.

In May 2005, Richard was taken ill with septicaemia, and died in hospital on 26 June after an unsuccessful heart operation. Five more episodes, forming the final games of Series 53, had been filmed before his death. Countdown was not broadcast on the day after his death, but the rest of the episodes were shown later that week. His last episode saw John Mayhew become series champion. His death resulted in the show taking a four month hiatus with Des Lynam taking over, starting his run at the beginning of Series 54 in October 2005.

A TV documentary on his life, Richard Whiteley: Television Man was released in 2003. He also wrote the book Letters Play! A Treasury of Words and Wordplay in 1995 (republished in 2000 as A Treasury of Words & Wordplay), and an autobiography, Himoff!: Memoirs of a TV Matinée Idle, and was posthumously the subject of a biography, Richard by Kathryn, by his partner Kathryn Apanowicz. On 1 July 2005, the programme Mr Countdown: A Tribute to Richard Whiteley was shown on Channel 4.

Whiteley was eventually succeeded by Des Lynam as Countdown presenter in 2005.

In the late 1990s to early 2000s, Richard claimed to be the mayor of Wetwang, an honorary town in Yorkshire that has no mayor. He borrowed chains of a local mayor, but after his encounter on 10 April 2000, whereupon he was saying goodbye to Les Noble, "...and may I say congratulations to your brother-in-law, who is mayor of Sunderland. I know how it feels.", he mentioned less of the term.