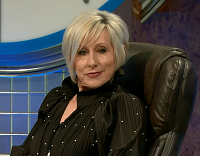 Sandra Pilson was a contestant in Series 57 and finalist in Series 80. As of her 2nd appearance, she was a Management Consultant from Whiston, South Yorkshire. Garnering six wins in her Series 80 run, she qualified to return for the finals in June 2019 as the 7th seed. Pilson was overpowered fairly early by octochamp and fellow Series 57 participant Dinos Sfyris in her quarter-final after Sfyris spotted two nines, but she still herself managed a creditable total of 71 points.