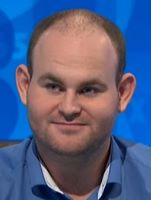 Sean Cooke was a finalist in Series 74.

Cooke began his run in the challengers the day after fellow series finalist Conrad Teixeira completed his octochamp run with a narrow victory over Sam Johnson. Moving into the champions chair, Cooke found his stride to record four more wins before a defeat to John Parke on an unsolved crucial conundrum. Cooke returned in June as the number 7 seed but lost to Robin McKay 107 – 72.