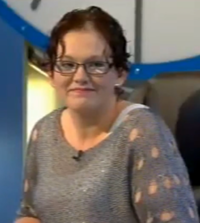 Antoinette Ryan in her debut game... 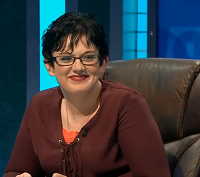 ...and back again in the Championship of Champions XIV!

Antoinette Ryan was an octochamp in and the runner-up in Series 71, as well as a participant in Championship of Champions XIV.

Ryan began her run by impressively dispatching of two-time winner Rachel Evans. This game was notable for having a potential ambulance available – three back-to-back nines. Ryan managed one of the three, MISPLACED, and ended up with a very impressive debut score of 107. Ryan went on to achieve six more centuries, being helped along by brilliant spots such as PRIMROSE, PANTIHOSE, PERIANTH and VIRGATES. Ryan also performed impeccably in the numbers rounds, managing to score in every single one of the 32. Ryan dropped below 100 only once, in her seventh game. In the game, against Peter Douet, Ryan was held back by Douet's offering of GERBILS and by Douet unscrambling the conundrum STAGNATED in just nine seconds. Ryan finished with a comfortable 58-point win against Matt Willock, landing her as the #2 seed with 859 points – just two above the now #3 seed Tricia Pay.

Ryan's time on the show was particularly memorable due to there being ten nines available in her octochamp run – one of the highest numbers of nines available to any player in the history of the show. Because of this, the total number of points available to Ryan in her octochamp run was 1,093, matching the record held by Glen Webb's run in Series 69. Ryan is also considered to be one of the greatest female players in the 15-round era, up there with the likes of Jen Steadman, Tricia Pay and Ann Dibben.

Ryan returned just six days later to defend her unbeaten crown in the Series quarter-finals, against No. 7 seed David Stanford. The game was surprisingly close throughout, however Ryan managed to break away on the final numbers round, giving her the win. Her semi-final was also a close contest against No. 6 seed Laurence Killen, notable for Ryan and Killen being equidistant in opposite directions from the target in three of the game's four numbers rounds. However it was Ryan that took the game, outshining Killen in the letters rounds with AILERON and SOAKAGE. The excitement didn't end there, as Ryan's next game would be the series final, against the seemingly invincible Dan McColm. McColm took an early lead with the word SOLATIUM, however Ryan fought back by solving a numbers round that McColm didn't, landing her a 2-point lead after six rounds. Her advantage, however, didn't last long, as Ryan made a couple of risks that didn't pay off, giving McColm a 20-point lead before the final numbers round. Ryan's favourite numbers selection of six small didn't prove to help her, and with McColm also solving the conundrum LETHALITY in just four seconds, Ryan was declared the series runner-up.

Catsdown and Championship of Champions XIV

In 2015, Ryan reappeared in the studio, this time appearing as a contestant on 8 Out of 10 Cats Does Countdown Series 7, Episode 9, assisting Sean Lock and Seann Walsh. She scored all the points available in the three rounds she participated in. Ryan made a second return in 2016 for the Championship of Champions XIV, losing to Mark Murray in the "Battle of the Leprechauns".