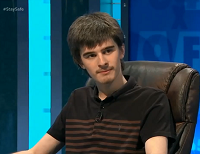 Callum Todd in the Championship of Champions XIV.

Callum Todd was the champion of Series 69, the first non-octochamp series winner since Series 46 when only a maximum of six heat wins were allowed, and a quarter-finalist in Championship of Champions XIV. He is also an Apterite and a member of c4countdown. As of 1 July 2021, he is the incumbent chairperson of FOCAL. During his finals he defeated three members of the 900 club, meaning he has had one of the most difficult series-final runs in the history of Countdown.

After scraping through his first 3 games, Todd joined Apterous and greatly improved his performances in his next 4 shows before controversially losing to Abdirizak Hirsi on a tie-break conundrum in his 8th game. However, his 7 wins and 747 points were enough to see him qualify for the finals as the No. 7 seed.

In his quarter-final, Todd played against record-breaking female octochamp Jen Steadman, and after falling behind early on, he turned it around to win by 3 points in a 108 – 105 game on an unsolved crucial conundrum. His semi-final saw him take on the No. 3 seed, Glen Webb, and despite his 6 small numbers games letting him down, he managed to put in a convincing 107 – 82 victory to take him into the Grand Final against Dylan Taylor, who set the then-highest ever cumulative score in Countdown history.

Todd went behind in the first round, but equalised immediately, and both contestants maxed the next 12 rounds prior to the crucial conundrum IHURTPALM, which Todd solved in 4.5 seconds to win the final with a score of 126 – 116. The final also saw him score his highest total on the show and become the first finalist ranked in the lower half of the seed table to win a 15-round series.

Todd's next televised Countdown appearance was in Championship of Champions XIV at the start of 2016, where, in the preliminary round, he squared off against Series 70 semi-finalist Samir Pilica. Todd opened an early lead in this episode by outclassing Pilica on the first two numbers games and spotting the darrenic word TOASTIER. Hereafter, he held onto this lead consistently, scoring in all but one of the remaining letters rounds and spotting the conundrum ROMANYIPS in fairly short order. This performance gave him a winning score of 127, bettering his previous personal best by 1 point, to Pilica's 88, bringing him into the quarter-finals and setting up a rematch with his Series 69 opponent Jen Steadman. Unfortunately for Todd, history did not repeat itself and he lost 107 – 85, infamously declaring SRSLY.

Todd returned to the show four years later on 22 December 2020 to take part in the second of three Christmas specials against Jack Hurst. Both players started level until Hurst pulled away and Todd slowed down, until picking up pace in the later rounds and ultimately signed off by solving the conundrum to finish with 100 points to Hurst's 125 points.

In 2016, Todd hosted his first Co-event, the inaugural Leeds tournament Countdown in Leeds 2016. In 2021, he became the chair of FOCAL.

In 2019, Todd launched the Focal Talk podcast along with Series 81 contestant, Paul Anderson. In 2020, Todd was the winner of the ZoomDown Hyper Special and in 2021, the ZoomDown GoatZDown Special.