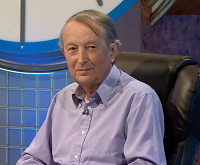 David Nixon, 22 years after his first appearance, in Series 81.

David Nixon was a contestant in Series 34 and 81. He's a Retired Building Trade Worker from Romsey, Hampshire. His son, Paul Nixon, also appeared in both those series, becoming an octochamp in the latter series.