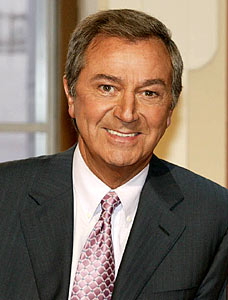 Des O'Connor (12 January 1932 – 14 November 2020) was presenter of Countdown from January 2007 to December 2008. He took over from Des Lynam at the start of Series 56, and remained presenter until the Grand Final of Series 59, won by Junaid Mubeen. O'Connor announced his exit from the show in July 2008 to focus on other projects, and was eventually replaced by Jeff Stelling.

O'Connor started off life as a variety performer where he appeared on stage both singing and telling jokes. He got his own show in 1963, The Des O'Connor Show and since then has had a run of television entertainment shows, including Des O'Connor Entertains and Des O'Connor Tonight, which ran for 26 years. Between 2002 and 2006, he hosted Today with Des and Mel with Melanie Sykes, until the show was cancelled. O'Connor was also the host of a revived version of the game show Take Your Pick, which ran on ITV from 1992 to 1998.

O'Connor was not just known for his light entertainment; he was a singer and had a UK number 1 hit with I Pretend. His crooning style was often mocked by comedians, particularly Morecambe & Wise, and he took such criticism in good spirit.

O'Connor's autobiography is titled Bananas Don't Fly. The title comes from an incident in his childhood and encapsulates his philosophy that if you want good things, you must make the effort to get them rather than expecting them to come to you.

O’Connor died on 14 November 2020, aged 88, following a fall. The episode that aired after his death was dedicated to him.