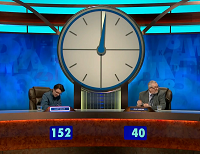 The highest ever score on Countdown!

Mellor's score of 152 broke the former record of the highest score ever on Countdown held by Zarte Siempre with a score of 150, exactly four months earlier in Episode 6991. Furthermore, his score was the highest ever achieved by just spotting three nine-letter words. The winning margin of 112 points was the joint-largest, equalling winning margins in Series 72 and Series 64, by Tom Cappleman and Tom Barnes respectively. This would be broken five days later in Episode 7080 with a margin of 133 by Mellor himself.