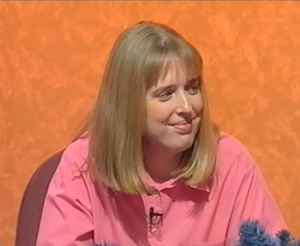 She was an IT Project Analyst from York. She was ruled to have suffered a bad call when her offering ROADSIDE was disallowed by Mark Nyman in her fifth game on account of the fact it was not in the Concise Oxford Dictionary, causing her to lose by two points. The production team felt she had been unfairly treated as a result, and with the previous edition of the dictionary restored, she was invited to return to continue her run during the next filming block. She was credited with the extra win and points, allowing her to qualify for the quarter-finals, wherein she lost to series winner Michael Calder.