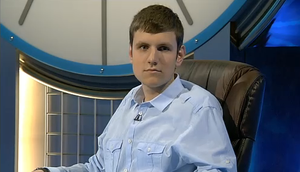 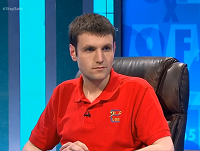 Innis Carson was an octochamp and semi-finalist in Series 61 and a participant in the 30th Birthday Championship. He was a Scottish chemistry student at Edinburgh University.

He made his debut in June 2009, and impressed with his high scores and rapid conundrum solves, his first 6 each being solved in under a second. His score of 861, made him the No. 3 seed of Series 61.

After dispatching Jeffrey Burgin in the quarters, he came up against the No. 2 seed, Chris Davies, and after beating him with INTENSE and SOLENOID, he had a 15 point lead with 2 rounds left, but he only got 1 away in the last numbers game, leaving it all hinging on the crucial conundrum EPITUSSLE, and with less than 5 seconds left, Davies unscrambled it to SLEEPSUIT, giving him the win by 102 – 97.

He returned to Countdown in 2013, as one of 41 contestants taking part in the 30th Birthday Championship. He received a bye to the first round, and won his first game against Series 64 runner-up Adam Gillard by a score of 116 – 91. He then played Series 60 champion Kirk Bevins in a phenomenal match, decided on a second conundrum, after both Carson and Bevins incorrectly guessed the first one.

In May 2010, he attended and won his first unofficial Countdown tournament, Co:Lon 2010, and he returned to defend his title at Co:Lon 2011, but fared less well second time around. He then won the CobliviLon tournament in 2012, followed by winning COEDI on home turf in November 2012, where he set a new record for the highest score in a "live" (as opposed to online play) 9 round format game with a score of 99 in a preliminary game against Paul James. Carson has continued an impressive streak in Countdown tournaments, winning COLIN XI and Co:Glasgow 2015 in 2015, and the inaugural Co:Leeds in 2016.

Innis no longer plays Countdown regularly, but still stays on as co-host of many events which include Manchester, Newcastle and Milton Keynes.

In 2015, he appeared on Only Connect as part of the "Scientists" team, with fellow Apterite Ian Volante. Later, in 2017, he captained the Edinburgh University team on University Challenge. The team went on to make the semi-finals of the series in 2018.

Away from Countdown, Carson currently lives in Belfast working as a question writer/researcher on the BBC Two quiz show Mastermind.

* includes 10 points from a tie-break conundrum
Retrieved from "https://wiki.apterous.org/index.php?title=Innis_Carson&oldid=144079"
Categories: