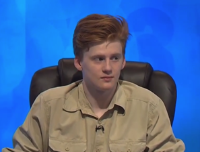 Jamie Wing was an octochamp in and the runner-up of Series 81. He was a 6th Form Student from Godalming, Surrey. He is also an Apterite.

In the final, Wing played close to Haughton. They levelled in the first two letter rounds until Haughton nicked the lead with the first numbers round. Wing, however, stayed close to Haughton throughout the game and as a last consolation solved the conundrum, TREATRASH to EARTHSTAR, to finish in the runner-up position with 95 points while Haughton won with 110 points. Wing amassed 1,206 points in his run.

* includes 10 points from a tie-break conundrum
Retrieved from "https://wiki.apterous.org/index.php?title=Jamie_Wing&oldid=148903"
Categories: