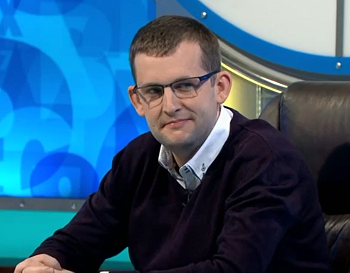 Jeff Clayton was a contestant in Series 51 and an octochamp in 76. He is a former chairperson of FOCAL.

Clayton won his first game against Ben Walden thanks to Walden offering two invalid words. Clayton then beat Yvonne McKeon on another crucial conundrum, thanks in part to a choice of six small numbers. However, in his third game he couldn't match Richard Hunter who spotted the nine letter word UNDERLAYS to go into the conundrum 13 points ahead.

In Series 76, Clayton was readmitted to Countdown, prevailing over Tom Marlow 109 – 74 on his "second début". He would go on to win seven further games here, securing octochamp status with a total of 846 points and qualifying for the finals as No 2 seed. He then prevailed over #7-ranked fellow octochamp Lawrie Collingwood in his quarter-final. Subsequently, in the semis, he fought valiantly against #3 prospect Moose Rosser, but ultimately came unstuck when his adversary solved the tricky crucial conundrum LOSTMYCAP.

Away from Countdown, Clayton works in the bus industry and has held senior operational and commercial posts, specialising in network design, crew scheduling, efficiency and best use of resource.

He was introduced to the underground world of online Countdown following a chance meeting with series 52 contestant Jon Stitcher when they met backstage at the Great British Spelling Test.

He appeared at the first Countdown tournament, COLIN 2005, and has been a regular at events across the country ever since.

He organised his first tournament in Leicester in 2008 and is now the regular co-host of events in Wolverhampton and Braintree. He has also previously delivered tournaments in Leicester, Bournemouth, Bristol, Birmingham, Chester, Huddersfield and St Albans.

In July 2014, Clayton appeared on the parent programme of Countdown, Des chiffres et des lettres, appearing on 3 programmes against Bernadette, a contestant from Belgium. He won the 2nd of the 3 shows, but lost the other two.