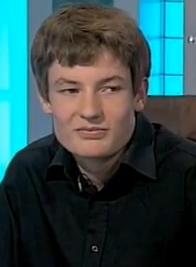 Jimmy puts a brave face on battling the Kirkulator in the series final.

Jimmy Gough was the runner-up of Series 60.

In Gough's debut episode, transmitted on 11 May 2009, he defeated Paul Casimir 115 – 84, scoring in every round. Throughout his run, which would prove to be that of an octochamp, he got numerous nine letter words such as LIONHEART. On one occasion he spotted two nines and achieved his highest score of 116. His conundrum offerings were infamously terrible, with five incorrect buzzes, including offering baulkline ☓ as the solution to the conundrum scramble BAULKLINE.

Gough's final octochamp total of 782 points was exactly the same as Cate Henderson's. However, Henderson was declared the #2 seed over Gough because she answered more conundrums correctly in the heats. As the #3 seed for the quarter-finals, Gough thus took on James Doohan. In a closely-fought encounter, he led going into the conundrum by just 9 points. NINECARAT was revealed; neither player could spot INCARNATE (though Gough did make a good guess, centarian ☓), so Gough advanced to the semi-final. Therein, he beat Hamish Williamson by 30 points, largely thanks to the nine-letter word REEDLINGS. All that now remained was the grand final against The Kirkulator. Though Gough made a good showing, he was beaten a few times by Bevins, who maxed the first 13 rounds, and a very hard conundrum, ROVINGERA, defeated both grand finalists to relegate Gough to runner-up position.

In May 2010, he attended his first unofficial Countdown tournament, Co:Lon 2010. He returned to London the following year for Co:Lon 2011.