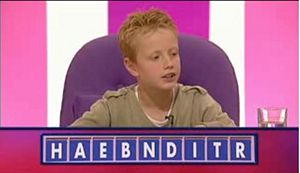 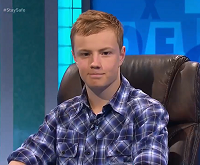 and five years later in the 30th Birthday Championship!

Laddiman won eight games with a top score of 105, including the nine letter words INCAPABLE and THIRTEENS. Laddiman was just eleven years old and attracted a lot of national media attention because of his age. Laddiman is the second youngest octochamp ever, behind Allan Saldanha, and the youngest to achieve it for 20 years. Also notable is the fact that he solved all eight of his conundrums, becoming only the fifth player to do so after Darryl Francis, Harvey Freeman, David Williams and Julian Fell.

Laddiman made his debut on 2 October 2008 in the champion's chair, the day following another octochamp run by Junaid Mubeen. He won comfortably 93 – 64 against James Bruce. His second opponent Jeff Francis held him to a tighter match as he missed ORDAIN and BANDIEST, setting up a highly crucial conundrum with Francis leading by one point, however Laddiman spotted that MUDTEMPLE anagrammed to PLUMMETED to earn another victory. The following week, he scored consistent comfortable victories against Bill Franklin, Don Walker and Alex Gaywood. He went on to beat Zachery Stephenson in a game notable for his nine INCAPABLE as well as a very funny blooper by Carol in the last numbers game (which neither contestant solved correctly). Laddiman beat Hardev Raikmo and finally Richard Pascoe, scoring his only century with words including MOPEDS, MATCHES and another nine, THIRTEENS. He topped it off by unscrambling NICEJOINT to keep his perfect conundrum record.

Laddiman returned for the Series 59 finals in December as the #4 seed, aged twelve, and beat Debbi Flack following an unsolved crucial conundrum scrambled as CLASSRIDE. In the semi-final he faced #1 seed Charlie Reams. Laddiman went 14 – 0 after two rounds, but couldn't keep up the same pace and when Reams spotted SUNDIAL in the final letters round, the game was effectively over. Both players scored on the next numbers game, but neither player could solve the conundrum AMBERNAIL, which was solved by Jo Brand in Dictionary Corner with the answer LAMEBRAIN.

He went on to play in the Championship of Champions XIII, still only aged twelve, and won a dramatic game on a crucial conundrum against Richard Priest, when Priest buzzed in instantly, but incorrectly answered with CAFETERIA ☓ instead of CAFETIERE. In Laddiman's following game, he faced undeafeated Series champion Nick Wainwright and kept the game close, notably solving a difficult six-small numbers game in round 10. However, Wainwright spotted the nine DEUTERONS when Laddiman only had an eight, which saved Wainwright from a crucial conundrum.

Later in 2009, Laddiman returned to Countdown to attend his first unofficial tournament, CoNot 2009 followed later by CoLei2, COLIN 2010 and Co:Lon 2010. He then attended COLIN 2011, and didn’t attend another event until Co:Man2020, 9 years after his previous appearance. During this time, he also organised Goatblitz 2010 online.

Laddiman returned to Countdown in 2013, as one of 41 contestants taking part in the 30th Birthday Championship. He received a bye to the first round, but lost his only game to Series 53 semi-finalist Jon O'Neill by a score of 101 – 76.

Laddiman was seated in the champion's chair for all 14 of his appearances, a record number of consecutive games spent in the same contestant position.