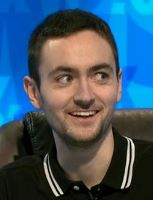 Kevin Steede was an octochamp in Series 72. He scored five centuries uring his octorun to return as number 5 seed for the finals. In his quarter-final against Andy Noden, his 4 large numbers pick in round 14 proved to be decisive as he avoided a crucial conundrum. Steede's run ended in the semi-finals with defeat to eventual series champion Tom Cappleman.