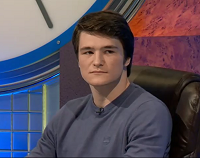 Luke Johnson-Davies solving the conundrum in the second quarter-final of Series 80.

Nearly 6 months later, Luke made his debut as a player on 5 December 2019 against one-game winner Zach Hart. Two nine-letter words and scoring points in every round helped him beat Hart convincingly and catapult to 139 points, a score which broke two records: Hamish Williamson's 10-year-old record for the highest-ever score set by a challenger against a champion by 5 points; and Elliott Mellor's 7-month-old record for the highest-ever debut score by 8 points (since broken by Dan Byrom in 2022). He earned four more victories, while never falling below 113 points nor failing to declare at least one nine-letter word, before stepping aside for the finals of Series 81.

Luke soon returned to the programme on 2 January 2020 to carry over his unbeaten run in the first heat of Series 82. Showing no signs of slowing down, he kicked off the new year in style by spotting another pair of nine-letter words to win his sixth game with 143 points, the joint fourth-highest ever achieved in the "new" 15-round format. In the third show of the series, he became the standout number one seed and only the second octochamp ever to join the "1,000 club", having accumulated a total of 1,024 points – at the time, the second-highest ever after Mellor's 1,061 – giving him an average of 128 per game.

Luke is the first contestant ever to declare a valid nine-letter word in at least one letters round in all eight of their heat games. He also broke the record for the most valid nines declared in heat games alone with 11 (since beaten by Luke Boynton with 12): HAILSTONE, OUTDRIVES, EUTOPIANS, LEGATIONS, ARRESTING, RESINITES, DISLOCATE, MONTICULE, ESTIMATOR, PARVITUDE and COURTIERS. In addition, he is the first contestant ever to record a run of four consecutive scores over 125.

As a result of filming being suspended in March due to the 2020 COVID-19 hiatus, Series 82 was extended to finish on-screen in December following its resumption in August. Luke returned to play his quarter-final match against the No. 8 seed David Kempshall on 10 December, a record 342 days after becoming an octochamp. He sailed off to a convincing lead, while Kempshall kept up. Both players spotted DETAILING for nine before Luke emerged victorious with a maximum of 136 points and qualified for the semi-finals. Luke's max game was only the eleventh in the history of Countdown, the second in the "new" 15-round format, and the first since December 2014. Luke then met No. 4 seed Ian Volante in the first semi-final. In the game, Luke added yet another 18 points to his total with a spot of SOAPINESS for nine. Despite Volante beating him in the second numbers round, Luke outmuscled the opposition by a score of 112 points (his lowest score to date) to 65. This propelled him into the ultimate series showdown against No. 2 seed Sam Cappleman-Lynes – only the second episode in more than 7,000 to feature two contestants bearing double-barrelled surnames, the first being Episode 882 between Derek Stuart-Clark and John Gough-Cooper.

In the final, after picking 1 large in his previous ten shows, Luke opted for 6 small in the first numbers round. A very easy target of 150 helped neither player and the scoreline after three rounds remained level at 25 – 25. He then broke the deadlock in round 4 by unravelling MAGESHIP in a consonant-heavy selection chosen by Sam. Luke remained 8 points up after gambling on 6 small again, which proved much more challenging than the previous two numbers rounds. In the final stretch of the match, Luke compounded LEAPFROG to escape the crucial 10-point margin with five rounds remaining, before confirming his 100% record of finding a nine in every show of his series with a spot of EUTOPIANS again! In the final letters round, Luke once again edged the opposition with a spot of MAEGBOTE to claim the title of Series 82 Champion and, in doing so, winning the longest ever series of Countdown. Luke held the Richard Whiteley Memorial Trophy but, for reasons unknown, this shot was not shown in the final cut.

Amazingly, Luke found the longest possible word in every letters round across the finals stages. In addition, he has already declared more nine-letter words in the letters rounds than anyone else on the programme so far with 14. Across his 11 victories in his series he amassed a series aggregate total of 1,384 points, the highest ever achieved; this statistic also makes him the first contestant to win a series with an average above 125. He had fallen behind in the scoreline only once thus far, and remained unbeaten on the show.

Luke returned to the programme on 9 January 2023 for Championship of Champions XVI. He played against Series 79 runner-up Martin May, and won 4 rounds to eclipse the opposition by 27 points, with the only missed maxima being ABUTTER and the tough conundrum LOTTOLIAM. This set up a highly anticipated quarter-final contest against Ahmed Mohamed.

In the quarter-final matchup, both players roared off the blocks by spotting two 9-letter words in succession, although Mohamed then put his foot on the gas with some excellent numbers rounds solutions, along with the word spots AMBREINE and JUDOIST. Johnson-Davies did steal the last numbers round to ensure he kept his record of scoring a century in every game, but Ahmed finished with a flourish by unraveling the conundrum to NICOTIANA, knocking Luke out of the tournament and condemning him to his only defeat on the show. That being said, Luke did manage to maintain his 100% record of spotting a nine-letter word in every episode, having spotted a total of 17 nine-letter words.

Luke has scored 1,601 points over his 13 games, with an average of about 123 points. He is also the 6th octochamp to have NEVER scored under a century, right behind Julian Fell, Craig Beevers, Jack Hurst, Dylan Taylor, and Jen Steadman.

Whilst Countdown was airing with COVID precautions, he appeared on Series 2 of ZoomDown. He won on a crucial conundrum against David Barnard, but lost on a crucial against Jack Hurst. Nearly a year later, Luke appeared on Series 4, where he had lost against Eeshan Malhotra. However, after Malhotra withdrew for personal reasons, Luke was invited back and then won the last two preliminary matches of the series with a total of 249 points. He will carry over his run onto the next series.

During the period, he came on the ZoomDown Championship of Champions as a wild card - since Elliott Mellor qualified in two series - winning against Jonathan Wynn and Rachael Montgomery before eventually losing to Conor Travers.