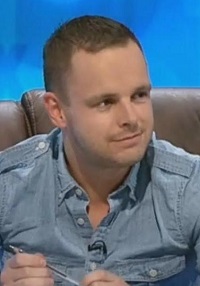 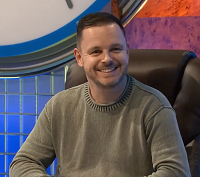 Matt O'Connor was an octochamp and the runner-up of Series 85. He first appeared as a contestant in Series 65 under his former surname of Croy. He lives in Warrington and is a serving Detective Constable, formerly with Greater Manchester Police but now with Cheshire Police, and has been a member of Apterous since 2011.

Matt returned to the show 11 years later where he won his first game of his second run with a tight game against five-game winner Craig Fawcett with 113 to Fawcett's 77, thanks to spotting MALONATES for nine in the last letters round. Matt followed this with a personal best of 130 points, which he bettered by nine points five shows later. In his last heat of his second run, he spotted PREDATION for nine, but his opponent, Liam Moss, clawed back to near distance by spotting TABOURETS for nine in the next letters round. However, a disallowed word from Liam allowed Matt to eventually wrap up and become an octochamp, with 8 centuries and an overall score of 949 points – 18 points fewer than Dan Byrom.

On 10 June, Matt returned to the show as No. 2 seed to start his finals run against fellow octochamp Dan Hall. Despite missing his declared target in the second numbers game, Matt broke away later on and won the game with another century to book his semi-final spot against another octochamp in Steve Hyde. Matt and Steve were level pegging throughout the early stages of the match, but once again Matt won more rounds to win by 40 points to set up a Grand Final match against the No. 1 seed, Dan Byrom; notably entering the game with two more series points than what Dan had accumulated when the finals matches are included.

As the statistics would indicate, the final was very close. Matt took an eight-point lead in Round 1 with OCTOPINE. His lead didn't last long, though, as Dan broke away with a successful six-small solution in Round 3, followed by EMPAESTIC for nine, putting Matt 20 points adrift. Matt managed to get back to just a five point deficit by spotting SUZERAIN and GOPURAM, however Dan extended his lead to 13 points by spotting LESIONED in the last letters game. An unsolved final numbers game by both players sealed the match in Dan's favour despite Matt bowing out with another conundrum solve. Matt was declared the series runner-up after the game finished 78 – 81, meaning that his total points for the series of 1,250 was one point fewer than Dan's 1,251. Including his Series 65 run and the 'Law & Order' special episode, his final total was 1,879 points from 18 appearances.