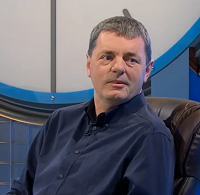 Mike Whiteoak was a finalist in Series 13, and was a contestant in the 30th Birthday Championship. He was from Mansfield. He is also a tournament Scrabble player.

Whiteoak débuted on 30 July 1987, winning with an impressive opening score of 79. After bottoming out at 42 in his fourth game, he climbed to 80 points - one of the highest 9-round scores ever - before losing to Nita Marr in his sixth game. He returned to the finals 15 days later, outrunning the same opponent he beat in his first game, Peter Tatlow, in a high-scoring quarter-final. Whiteoak’s run eventually ended with defeat to Kevin Nelson in a close semi-final.

He returned to Countdown in 2013, as one of 41 contestants taking part in the 30th Birthday Championship. After receiving a bye to the first round, he lost his only match against Series 44 semi-finalist Dave Hoskisson by a score of 85 – 81.

Whiteoak appeared on The Chase on 7 March 2018.