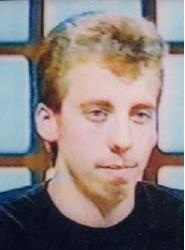 Nic Brown was an octochamp in and the champion of Series 14, as well as the winner of Championship of Champions IV. He is currently the only contestant to have achieved the grand slam of octochamp, series winner and champion of champions, finish as No. 1 seed in the heats and never lose any televised game. This makes him one of the most successful contestants in the history of Countdown.

Originally from Nottingham, Brown was a student at Sidney Sussex College, Cambridge University. He made his debut on 22 October 1987, beating 6-time winner Alan Steel on a crucial conundrum in the 14th heat of Series 14. He quickly rattled off another 7 wins to become an octochamp and the No. 1 seed for the finals. In his quarter-final match, he defeated Derek Rutter 46 – 35, before defeating Steel for a second time in the semi-final. In the Grand Final, he crushed his opponent, Joel Salkin, by a score of 108 – 36 — only the fourth time a century had been achieved in a 14 round game, and the biggest winning margin achieved under that format.

Brown returned in 1989 for Championship of Champions IV, beating Stephen Deakin and Nita Marr on his way to the Grand Final against Series 16 champion Tony Vick. Brown was able to hold off Vick's challenge for the duration of the game and won by a score of 78 – 68, becoming only the second person after Harvey Freeman to achieve the 'grand slam' of becoming an octochamp, winning a series and a Championship of Champions. Brown did not return for the Supreme Championship, and therefore maintains his unbeaten record of 14 wins out of 14 to this day.