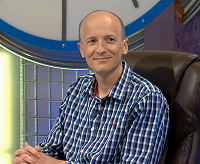 Nixon first appeared in February 1997 and won his first game against eventual series semi-finalist Paul Peters by 60 – 32 points. He then won his second game but lost his third against Roger Hayward in a low-scoring 31 – 29 game. He then returned to the programme 22 years later and started his run against Pauline Creer with a strong 107 points to Creer's 45 points. He then followed with several sensational performances, scoring a total of 7 centuries from his 8 games. He ultimately wrapped up his run with 893 points to become an octochamp, and qualified for the finals ranked 3rd.

In his quarter-final match against number 6-ranked John Osmond, it was very close; Nixon took an early lead with his finding of ADUSTION. However, his 6 small gambles went against him, and found himself 2 points behind going into the third half. Nixon beat Osmond in one more letters round to lead by 5 points going into a crucial conundrum, with both players over 100 points. With half a second left, Nixon buzzed in with the correct answer to book a place in the semi-final. Nixon took on number 2 prospect Jamie Wing in the semi-final, keeping the game neck-and-neck until very near the end, when Wing broke away with two quality solves in the final letters and final numbers to relegate Nixon to a semi-final defeat. Nixon amassed a total of 1,087 points in his Series 81 run, although with his 1997 run he garnered an overall total of 1,233 points.

Since appearing on the show, he became a member of Apterous and has participated in ZoomDown by appearing in Series 1, Series 2 and becoming a tetrachamp in Series 4, winning against James Burley in his quarter-final, but losing against Rachael Montgomery after an unsolved crucial Conundrum in his semi-final.