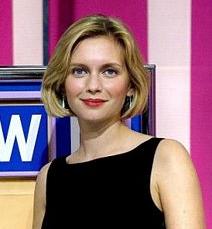 Rachel Riley. Publicity photo taken on the old striped set, which was replaced with the blue one on her debut.

Rachel Annabelle Riley, born 11 January 1986, is a presenter of Countdown. She took over from Carol Vorderman at the start of Championship of Champions XIII in January 2009, prior to Series 60.

Born in Rochford, Rachel graduated with an upper second class Master's Degree in Mathematics from Oriel College, Oxford, the Alma mater of such people as Jon Bentley and Sir Walter Raleigh. She was chosen from around 1,000 applicants when it was decided to cast a previously unknown arithmetician to replace Carol Vorderman. Countdown is her first television experience.

Her role is to put the letters and numbers up on the board, and also to work out any numbers solutions not solved by the contestants.

Rachel was born approximately 3 years and 3 months after the show was first broadcast (during the time of Series 8). She was brought up in Essex and attended Southend High School for Girls. She attended Oriel College at Oxford University where she received an upper second-class honours degree in mathematics. After graduating she started work as a data analyst for a London web design company.

Rachel was chosen from a large pool of over 1,000 applicants for the job of hostess. The first stage was writing a 50-word paragraph on why she wanted the job, which according to an interview of August 2009 was centred mainly on her interest in the numbers game, and starting with 'I am one from the top'. The second part of the auditioning process was reportedly a screen test. She bought a short purple dress and recorded the clock music on her phone so she could practice. The news that she had passed came a few days later.

Rachel Riley before the start of the final of COC13

Outside Countdown she has been known to have presented at least one other television show, as in October 2010 she presented a tour of the Manchester United Carrington training ground on MUTV, as she is a keen supporter of Manchester United. She has reportedly been watching games at Old Trafford since the age of 10.

Following in Carol Vorderman's footsteps, she appeared on the 11th series of Strictly Come Dancing in 2013. Like Vorderman, however, she was rather terrible - a subject frequently referenced by Jimmy Carr - although she did stay with Pasha Kovalev romantically after they were paired up on the show. 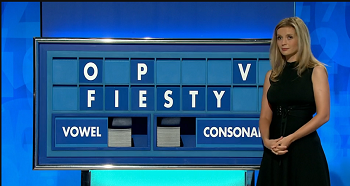 Rachel met James when they were studying together at Oriel College. They were dating four roughly four-and-a-half years before they split for nine months between December 2009 and August 2010. James proposed to her on her 25th birthday (11 January 2011) and her engagement was announced on the 14 February 2011 show. They married on 11 August 2012, then divorced in late November 2013. Since 2014, she has been dating Pasha Kovalev, who made his first week of appearance on the show in Series 76. The couple proceeded to marry on 30th June 2019. On 15 December 2019, Riley gave birth to a daughter, Maven Aria.

* Includes 22 Points from a bonus game.

Retrieved from "https://wiki.apterous.org/Rachel_Riley"
Categories: Presenters | Contestants in 8 out of 10 Cats Does Countdown | Strictly Come Dancing