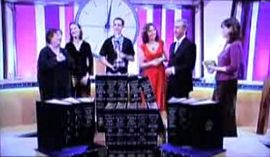 Series 56 ran from 2 January to 22 June 2007. The first of four series hosted by Des O'Connor, it was won by Nick Wainwright.

This series featured four octochamps but, for the first time since Series 49, none with over 800 points. No. 1 seed Aaron Webber snuck through the first quarter-final on an unsolved conundrum, IDEALSNOG (ALONGSIDE). Jean Webby won comfortably and Nick Wainwright saw off the challenge of No. 6 seed Vivienne Mead. However No. 4 seed Amey Deshpande couldn't join the top three seeds, losing to 7-time winner Anita Freeland. In the semi-finals Freeland continued her run of upsets by beating No. 1 seed Aaron Webber on a crucial conundrum, and Nick Wainwright got his highest ever score in beating Jean Webby. This set up a final between No. 3 seed and No. 5 seed. No woman had won a 15-round series and no player had ever won a series whilst losing a game in the heats. From Series 46 to Series 55, all the series winners were unbeaten. The game was very close with a few mistakes which lead to a low scoring finish with Freeland leading 85 – 79. The conundrum OYFUSSPOT was revealed and it was Wainwright that solved PUSSYFOOT in 1.5 seconds to become Countdown's 56th champion. Freeland was relegated to the runner's-up spot, only the second woman to reach a 15-round series final after Grace Page, but she returned for the Championship of Champions XIII tournament.