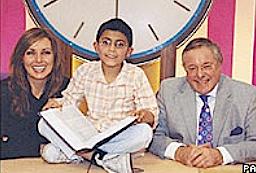 The boy wonder himself, Tanmay Dixit.

Tanmay Dixit was a contestant in Series 53.

From Manchester, he is regarded as the youngest ever player to appear on the show at just 8 years old.

He's also the youngest player ever to win a game, winning two games with a score of 95 in his second game. He lost his 3rd game by just 5 points, with a respectable score of 82.

Some of his offerings got attention from the national press, most notably FARTED and FANNIES.

His mother, Kavita, appeared on the show in Series 55.