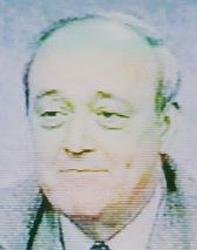 English during his quarter-final.

Terence English was the champion of Series 40 and a semi-finalist in the Championship of Champions X.

English first appeared on Countdown on 21 January 1999, beating John Holton 70 – 34 in the 19th heat of Series 40. Terence went on to win a further 5 games before losing at the hands of Barry Lyons. His 6 wins, though, were enough to earn him a spot in the finals as No. 5 seed. In the quarter-finals, he beat Ricky Cohen 75 – 65 in a tense game, and in the semi-finals, Terence overturned No. 1 seed Peter Hutchings 67 – 30. The final against Glynn Leaney was a closely-contested match, with Terence leading by just four points going into the crucial conundrum. However, neither contestant was able to unscramble GOPHERITT in the time, meaning Terence won the game 81 – 77 and became series champion.

A few months later, Terence was invited back for Championship of Champions X, where he beat Simon Cooper in the first round before losing to Kate Ogilvie in the semi-final. Despite this loss, Terence's Countdown career was not over, as he was invited back a few years later to film a special episode, pitting him against Glynn Leaney in a rematch of their grand final. Once again, Terence would run out the victor, this time more comfortably, winning 92 – 57.