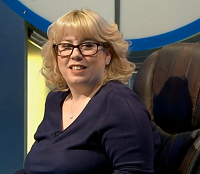 Tracey Mills in the Championship of Champions XIV. 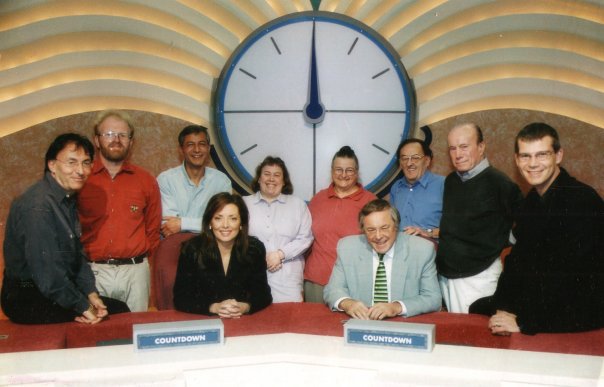 Tracey Mills (fifth left) with the other contestants and the team, during her appearance in Series 47.

Tracey Mills was a contestant in Series 47, an octochamp in and the runner-up of Series 72, and a participant in Championship of Champions XIV. She is also an Apterite. She has also appeared in the Countdown audience numerous times as the conundrum solver, and owns seven Countdown mugs, probably more than anyone else.

After narrowly losing in her first appearance in Series 47, Mills returned for her second début in early 2015, as part of Series 72. Despite falling behind in her first game against fellow apterite Neil Stephenson, she found the 9 letter word FEATURING late on to secure a century. Five more centuries followed in her octorun, including in her last game against Wendy Cooke, where she held her opponent to the then lowest ever 15-round score on Countdown.

Mills entered the finals as number three seed, and despite a nervous start to her quarter-final, defeated Jordan Barker and proved too strong for number two seed Gerry Tynan in the semi-final to set up a clash with number one seed Tom Cappleman. Despite taking an early lead with BEACONS, Mills fell behind after the first numbers. While keeping Cappleman in her sights, she was unable to force a crucial conundrum and ended the series as runner-up.

Mills returned in 2016 for Championship of Champions XIV. In the first round, she was given a tough draw against multiple-record holder Dylan Taylor. Here, Mills demonstrated excellent knowledge in a tough mix of letters and numbers rounds, but made the two unfortunate offerings of iodcrase ☓ and servuga ☓, both of which were very slight misspellings of valid words spotted by Taylor and by Dictionary Corner. The Series 69 runner-up went on to score in every round and emerge the victor by a score of 120 – 73.

Mills made her Co-event debut at COHUD and CoChest2 in 2012. She competed in the 2018 FOCAL finals as the No. 3 seed and finished in 7th place, winning two out of seven games.

Mills participated on William G. Stewart's final series of Fifteen to One in 2003. She has also appeared on BrainTeaser on Channel 5 and on TV Scrabble on Challenge.