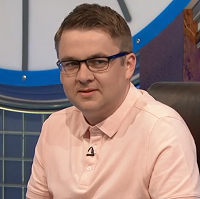 Phil Peel was a contestant in Series 77. He is also an Apterite. He had hung on to the finals table as the #8 seed for just over two months until another Apterite, Bradley Horrocks, knocked him off that table on 30 November 2017 and thus prevented him from returning to the finals.