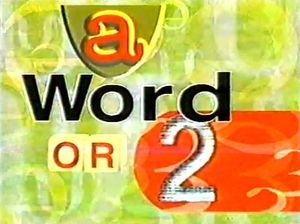 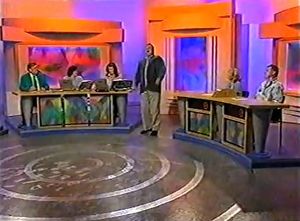 The contestants and team 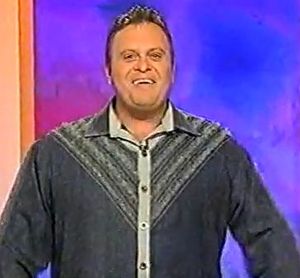 A Word or 2 (1998-2008) was a televised game show in South Africa, and surprisingly only the second English-language version of the show so far. It was adapted from Des chiffres et des lettres in the same way that Countdown was in 1982. The host was Jeremy Mansfield.

The main host also puts up the letters in this version. As with the numbers game in the UK, contestants can choose letters from a particular place in addition to choosing vowels or consonants. Numbers though, are simply chosen from two piles - large and small. Interestingly the numbers expert is also a man on this version, William Smith. As with the UK version there are also two people in dictionary corner, most frequently English and Afrikaans word experts Lizz Meiring (also an actress) and Patricia Glyn (also an adventurer). An additional feature of the show is its own in-house deaf sign language presenter, Lauren Price.

Rounds from an episode

This section shows the transcript of a typical episode which was transmitted in 2004. Second names of players are unknown. The transcript shows possible words in English only, not in Afrikaans, which also could be given as an answer in this version. In Letters rounds, all players receive points for each word, even if beaten by their opponents (equivalent to them receiving their "raw scores" as used on Apterous). Players don't have buzzers in their tables, so they have to say "STOP!" before giving the answer in Conundrums. At the end of the episode, the host gave the "teatime teaser" equivalent to the viewers, in order them to call to the station with the answer and take a prize.