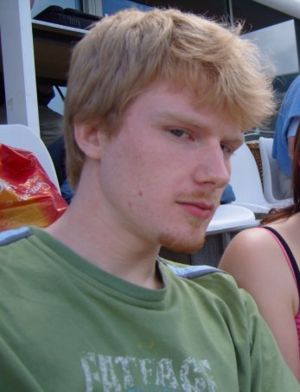 Charlie Reams, known not infrequently as Soo, was the runner-up of Series 59 and Championship of Champions XIII, and is one of the most important characters in the Countdown online community. One of the best players to not win a series, he created The Countdown Database which replaced The Countdown Corral after being asked to make a list of all the nines in the current series. The site quickly grew and now includes round details from over 1,000 games and statistics about players, series and octochamps. Soo also runs this site and Apterous, and is also the head moderator on the C4countdown online forum.

After his spells in the unofficial tournament scene, Reams made his debut on the televised show on 15 October 2008 and scored 114, the highest debut score of the series. His next game against Darren Edwards was one of the biggest thrashings of all time, with Reams winning by 95. Only Julian Fell and David O'Donnell have won a game by a larger margin. After slipping to 92 in his next game, he scored over 100 in three of his next four games, before a dramatic 8th game. Reams trailed from the start but managed to take a slim lead in round 11 with BEASTIE and then scored 7 points on a difficult final numbers game to go into the conundrum leading 63 – 52. He got the conundrum and completed his run with 73 points. His cumulative score was 820.

Reams returned for the finals in December 2008 as No. 1 seed. His quarter-final was a close and tense affair but he survived without a crucial conundrum, despite Patricia Jamieson beating him in the last numbers round. The semi-final was another close affair, this time against No. 4 seed 11-year old Kai Laddiman. Laddiman beat him in the first few rounds to take a 14 – 0 lead, but he made a comeback with IONIZES. Reams got closer on the following numbers game, and then beat Laddiman with SPRAINED, OUTRAGE, the second numbers game and SUNDIAL. This gave Reams an unassailable lead going into the conundrum AMBERNAIL, which neither player could solve but was found by Jo Brand in Dictionary Corner.

In the final – Des O'Connor's and Carol Vorderman's last show – the No. 1 seed faced the No. 3 seed Junaid Mubeen, and the game was very close. Reams missed STEMMED in the first round, but Mubeen had slopers ☓ disallowed in the next round. The players scored in the next two rounds, before Mubeen decided to pick six small numbers. Reams declared nothing while Mubeen declared 929 but had miscounted, thus failing to score. In the second "half", Mubeen took the lead with ORGANDIE and extended it when Reams had aliener ☓ disallowed. Mubeen held onto this lead until the final numbers, where Reams made a tactical choice of 4 large. Unfortunately the target was too easy to achieve, and both players put their pens down after 20 seconds. Mubeen thus won the final prior to the conundrum ERACLOSES, which Reams solved to bring the final scoreline 88 – 84 to Mubeen.

He was invited back for the Championship of Champions XIII, beating Peter Davies in the first round. In the second round, he played Mubeen again, a rematch of their series final. This time, Reams forced a crucial conundrum and was nine points ahead. Neither player could solve the conundrum LEGALSIRS so Reams just scraped into the semi-final. There he faced one of the favourites, Jon Corby. Reams demonstrated string form by spotting 5 eight letter words in a row, a Countdown record. Corby couldn't compete, and lost 110 – 76 after an unsolved conundrum.

In the final, he faced Steve Briers. Reams started with LEPTON while Briers had OPULENT for seven. Briers maintained this lead until he had reenact ☓ disallowed. Briers then took the lead, first with SNOOZED, then another seven points when Reams went wrong on the numbers. A seven, a six and a five for both players meant that Reams had to beat Briers on the final numbers game to force a crucial conundrum. However Reams declared nothing, and Briers declared 5 away. Briers had won the tournament, and just the conundrum remained. The conundrum was, appropriately, ELITEBOUT. Briers first buzzed on 29.75 seconds with a made-up wrong answer libouette ☓, then comically Reams buzzed in with GANDISEEG, referring to Richard Brittain's guess at the conundrum in the first round. The solution was OUBLIETTE.

Reams appeared on Eggheads on BBC Two in 2018, and has also written a handful of questions for Only Connect.