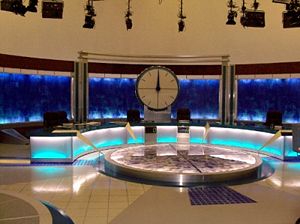 This series marked the debut of the blue set; it would be redesigned in Series 77 in 2017.

Championship of Champions XIII ran for three weeks from 12 to 30 January 2009, and was the last prior to the unofficial CoC hiatus that was in place during the early 2010s. The championship marked the début of Jeff Stelling and Rachel Riley as presenters, and was the last CoC to be recorded in Yorkshire. It was won by Steve Briers.

The draw for this Championship of Champions was made on the morning of 30 October 2008 and announced by Damian Eadie on the c4countdown forum. It took place during the first three weeks of Series 60, with mainly players from Series 55 through 59 taking part, although one of the contestants, Jon Corby, was from Series 54 and did not participate in the the Championship of Champions event that followed suit due to the lineup for this contest having already been decided by that point. Craig Beevers, the Series 57 champion and favourite for the tournament, declined his invitation due to Scrabble commitments. 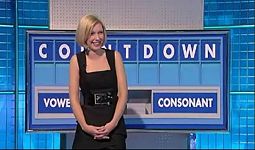 Rachel Riley before the start of the final.

Th championship also marked the début of the now-familiar blue set, featuring the distinctive letters and numbers patterns, which would be redesigned in Series 77. The purple and orange cloudy background in the opening title sequence and break cues were also replaced with a blue background.

CoC XIII was notable for apparently having used an unusual shuffling system for generating the piles of letters for use in its letters rounds, leading to frequent long strings of twice- and thrice-repeated letters, especially vowels. For example, in the history of the 15-round era, the vowel pile has contained three consecutive I's only five times; four of these occurrences were during CoC XIII.