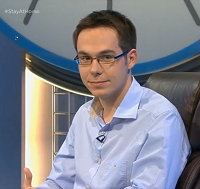 Nick Wainwright was an octochamp in and the champion of Series 56, as well as a semi-finalist in Championship of Champions XIII and a participant in the 30th Birthday Championship. He has also been an Apterite since 2008.

He first appeared in May 2007, beating Rob Waters and seven others on his way to becoming an octochamp. He reached the grand final, coming from behind to beat Anita Freeland on a crucial conundrum and become the champion of series 56. Surprisingly, Wainwright did not get a century until his 9th game, after his octochamp run had finished, although he scored 99 twice in a row. 726 is the lowest total for an octochamp who went on to win the Series. Overall in 11 games, he averaged 93.3 points per game.

Wainwright returned for the Championship of Champions XIII as one of the favourites, beating Steve Baines by 20 points on a crucial conundrum, and then beating Kai Laddiman in a close, tense game. The game was always close, even when Wainwright got DEUTERONS for nine Laddiman could still win. However, when both players scored on the final numbers game, Wainwright avoided a crucial conundrum, which was just as well for him as Laddiman buzzed in in less than two seconds with TRACKSUIT.

In the semi-final, Wainwright faced the impressive Steve Briers who'd scored 121 and 118 in his two previous games. This was also a close game, with neither player taking a commanding lead at any point. Wainwright took the points on the 6-small numbers game, but still went into the last numbers game trailing by 5 points. He elected not to choose six-small ones again and when both players got ten points, it was a crucial conundrum. However neither player could solve it, and Wainwright lost by just 5 points. He won 13 games in a row before his only defeat; the longest winning streak of any player in the tournament, noting that Junaid Mubeen and David O'Donnell both lost after 12 consecutive winning games.

He returned to Countdown in 2013, as one of 41 contestants taking part in the 30th Birthday Championship. He lost his only match against Series 28 runner-up Wayne Kelly by a score of 105 – 68.