Carol Vorderman, also Carol Mather and Carol King, (b. 24 December 1960) was Countdown's co-presenter for an astonishing 26 years in a row. She was born in Bedford, grew up in North Wales, and studied engineering at Sidney Sussex College, Cambridge.

She was the second named woman to appear on Channel 4, behind lexicographer Mary, (who was seen when Ted Moult introduced his assistant). In early episodes she was only called upon to provide the occasional numbers solution, alternating with Dr Linda Barrett. When Barrett left at the end of Series 2, Carol took on the role of solving unsolved numbers games full-time. After the departure of Lucy Summers in 1989, she began putting up the letters and numbers as well. Over the years she became known for her repartee with Richard Whiteley. After Des Lynam took over as presenter, she gave the celebrity introductions at the start of each show and was credited equally with Lynam and O'Connor, rather than as co-presenter.

Vorderman had more appearances than anyone else on Countdown, with 4,832 appearances as arithmetician, as well as 1 as a contestant, before being overtaken by Susie Dent in April 2021. 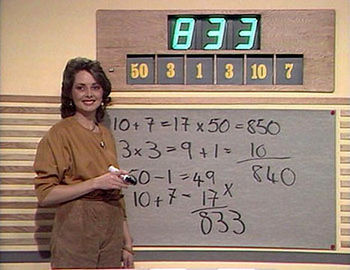 Vorderman on the first ever episode.

During her marriage in the mid-1980s she was billed on Countdown for a while as "Carol Mather", a gift of a name — considering her maths expertise — which was probably not lost on Richard. In 1997, she appeared as a contestant in a Christmas special, under another married name, "Carol King", and was crowned the winner after defeating Richard Whiteley on a crucial conundrum. 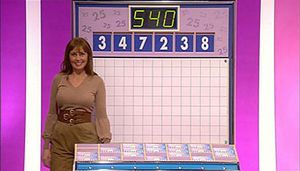 Vorderman reprises her "birthday suit" in the 25th anniversary special.

As Vorderman's role on Countdown grew, so did her popularity with television producers. She was the host of Grand Slam, a television show pitting quiz show champions against each other on general knowledge and mathematical puzzles. Outside of the quiz sphere, she's hosted Tomorrow's World, How 2, has appeared on Strictly Come Dancing and Stars in Their Eyes. She also appeared on Have I Got News for You which featured a farcical Countdown numbers game.

As a journalist, she's written for the Daily Mirror and The Daily Telegraph about her detox diets, and has published books and DVDs on the subject. She's also a big fan of sudoku and has written two books on how to solve them. She promotes numeracy amongst children and adults and is known for her charity work. She was the winner of ITV's Gameshow Marathon which allowed her to raise £60,000 for charity.

On 23 July 2008, Des O'Connor announced that he would be leaving the show, which prompted Channel 4 to announce that Vorderman would also be leaving. Vorderman later revealed via the press that she had been willing to take a 33% pay-cut in line with Countdown's budget being cut by 33%, but when Channel 4 offered her a 90% pay-cut, she refused and opted to leave the show at the end of Series 59. The Series 59 final on 12 December 2008 was her final episode, which was preceded by a 30 minute farewell to Carol, hosted by Gyles Brandreth which included other Dictionary Corner favourites such as Keith Barron, Barry Norman, Rick Wakeman, Paul Zenon and Kathryn Apanowicz. The series final followed, won by Junaid Mubeen, which featured Susie giving flowers to Des, and Gyles giving flowers to Carol. Carol made a small speech before shedding tears, which was the last time she was ever seen on Countdown. She was replaced by Rachel Riley.