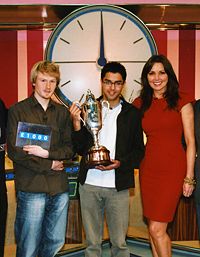 Series 59 ran from 23 June to 12 December 2008, and was won by Junaid Mubeen. As well as being the first series to take a break during the summer, this was the last ever series to feature Des O'Connor and Carol Vorderman as presenters.

The first quarter-final saw Charlie Reams spot words including SAMPHIRE and FIESTAS to beat Patricia Jamieson in an otherwise close game. The second quarter-final between Martin Bishop and Lee Simmonds was a drubbing. Bishop scored 112 out of a possible 117, scoring maximums on all numbers games and the conundrum and dropping just five points on the letters. Junaid Mubeen put in an even better performance against professional footballer Neil MacKenzie, winning with a score of 124 out of 127 including the tricky conundrum FOAMICING. The fourth quarter-final featured Debbi Flack and 11-year old fan favourite Kai Laddiman. Both players made mistakes in the game, but it was Laddiman who triumphed after neither could solve the crucial conundrum CLASSRIDE.

The first semi-final looked like it might produce a surprise as Reams went 14 – 0 down against Laddiman. However, Reams beat Laddiman in a further five rounds in the game, including the first and second numbers game. In round 13 Reams found the word SUNDIAL when Laddiman only had UNSAID; with this Reams was guaranteed victory and avoided a crucial conundrum. The second semi-final promised to be a classic as the two players had scored 236 out of a possible combined maximum score of 244 in their previous respective games. The game didn't quite ignite, although the scores were always close. Mubeen went ahead with SPATIAL and ROMAINE, but Bishop reduced his arrears when Mubeen had precasted ☓ disallowed. However, when in the final letters round Bishop had somaine ☓ disallowed the game was mathematically over, and Mubeen went on to win by 40 points in a game closer than the final scoreline suggests.

In the final, the #1 seed faced the #3 seed in a game which proved very close. Reams missed STEMMED in the first round, but Mubeen had slopers ☓ disallowed in the next. Both players scored in the next two rounds, before in round 5 Mubeen decided to pick six small numbers. Reams declared nothing while Mubeen declared 929, two away from the target. However, he had miscounted and scored no points. In the second half, Junaid took the lead with ORGANDIE and extended it when Reams had aliener ☓ disallowed. Mubeen held onto this lead until the final numbers round. Herein, Reams made a tactical choice of four large numbers; this didn't work out as both players got the target and put their pens down after 20 seconds. Mubeen had a 14-point lead going into the conundrum, but it was Reams that unravelled ERACLOSES and lost the final by just 4 points, 88 – 84.