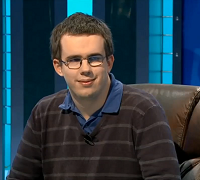 Tom Cappleman in the Championship of Champions XIV.

Cappleman débuted in Series 59, in which he lost his only game to Martin Bishop. He returned to Countdown for Series 72, starting his second run with an impressive 14-max performance against Charlene Rose. Seven more victories followed, including two by more than 100 points to confirm him as the clear No. 1 seed for the finals.

In his quarter-final, Cappleman failed to score a century for the first time, but returned for his semi-final with a 12-max performance against Kevin Steede, to set up a Grand Final with fellow returnee Tracey Mills. Despite falling behind early on, Cappleman took the lead after the first numbers game and never looked back, eventually winning 107 – 89 and hilariously answering floorlick ☓ to the conundrum.

Cappleman returned to the studios in January 2016 as one of sixteen entrants in Championship of Champions XIV. Playing in the first preliminary match of the tournament, he defeated Series 69 semi-finalist Glen Webb. With both players spotting all three of the game's available nine-letter words, this game proved to yield a joint score of 248 – the highest achieved in the "new" 15-round format, until it was beaten just 11 days later by Andy Platt and Dylan Taylor's 252. In the quarter-final, Cappleman faced Series 68 champion Giles Hutchings but lost on the crucial conundrum ULTIMOLEG and thus bowed out with his first defeat since his one to Bishop in 2008.

In July 2016, Cappleman appeared on Series 12 of Only Connect as part of the "Verbivores" team alongside fellow Countdowners Phyl Styles and Series 65 champion Graeme Cole. They went on to win the series in April 2017. They subsequently lost a one-off "Champion of Champions" special on 3 January 2020.

Cappleman's next quiz show appearance was Mastermind on 9 November 2018. He scored 23 points, but unfortunately lost his heat game by virtue of six passes to the winner's one.

In 2011, Cappleman made his Co-event début at Co:Lon 2011, where he finished in an impressive 2nd place, losing out to Matt Bayfield in the final. The following year, he appeared at CO:REA and CobliviLon. In 2016, he won Countdown in Reading 2016, defeating Paul Erdunast in the final on a crucial conundrum. He competed in the 2018 FOCAL finals as the No. 8 seed, and finished in 1st place in the heats, winning 6 out of 7 games. This was followed by a grand final match-up between him and Jonathan Wynn, where he was defeated.