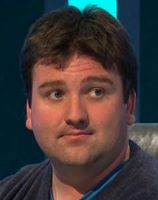 Jonathan Wynn was an octochamp in and the champion of Series 73 who débuted in Series 63. He has also been an Apterite since 2009, and is a regular Co-event player.

In his first show, Wynn showed some strong word knowledge but lost on the crucial conundrum WINTERNUT. He returned to the programme ten series later, and after more practice on Apterous, he carded a century in all eight of his heat wins. He ended up ranked No. 2 seed for the finals, with his cumulative score of 922 being one short of Thomas Carey’s 923. However, Carey suffered defeat in his semi-final.

Wynn is notable as the first octochamp to have always been ahead of his opponent in all 120 rounds of his run. He continued this pattern into the finals, having a higher score than his quarter-final opponent, 6-time winner Liam Moloney, at every juncture (although Wynn failed to attain a century there). This record only ended in his semi-final, in which both he and Stephen Briggs scored in the first round; nonetheless, in this game Wynn would go on to achieve his highest total score so far, and was denied the new 15-round record score on a wrong answer to the conundrum LIDLTENSE.

The next day, Wynn faced the numbers whizz Matthew Tassier in the Grand Final. After Tassier could only come up with the invalid waiged ☓ in round 4, he turned it round with his specialist 6-small choice in round 6 to take a 4-point lead over Wynn. Wynn later regained the lead with REQUIEM in round 12 and SALMONID (beating Tassier’s disallowed offering of mondials ☓) in round 13, but Tassier’s 6-small pick beat Wynn again, forcing a crucial conundrum. However, neither player could unravel TTHESCORE, giving Wynn the win and the championship after a close "letters vs numbers" nail-biter.

Wynn returned to Countdown in January 2019 for the Championship of Champions XV, where he took on Series 78 semi-finalist Phil Davies in the first preliminary round of the tournament. Despite the game's fairly low maximum score, Wynn amassed a century here, achieving maximum points in all but one of the letters rounds (missing only the word FOOTSURE, which he did have noted) to take the game 103 – 68. He then played Philip Aston in the quarter-finals, where – largely due to a very obscure but misspelled nine-letter word – he suffered his only defeat since his original one to Ryan Loughborough.

Wynn competed in the 2018 FOCAL finals as the No. 6 seed, and finished in 2nd place in the heats, winning 5 out of 7 games. This was followed by a victory over his opponent in the grand final, Tom Cappleman, and therefore he become the 2018 FOCAL Finals champion. In 2020, he won COLIN XVI.