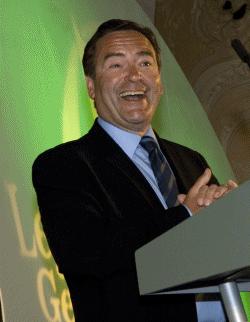 Jeff Stelling (born 6 December 1955) was presenter of Countdown from 2009 to 2011. He took over from Des O'Connor at the start of Championship of Champions XIII in January 2009, prior to Series 60, at the same time as Rachel Riley replaced Carol Vorderman. He remained host until the Series 65 Grand Final, and was replaced by Nick Hewer.

Stelling is best known for hosting Sky Sports' Soccer Saturday programme, an afternoon-long show of previews, reports and goal updates. He is noted for his frequent use of puns involving player names - a goal by an Abroath player called Kevin Webster was greeted with the comment "Sally will be pleased" in reference to the Coronation Street character of the same name, while a red card for Gareth Jelleyman led Mr Stelling to comment that "Jelleyman has thrown a wobbly", a slang term for losing your temper which also relates to the consistancy of jelly. One of his worst puns was used in conjunction with Matt Le Tissier, posing the question "How did "Agger do, do, do"?", relating to a pun on the song Agadoo and Liverpool defender Daniel Agger. Some of his puns overspilled into Countdown, drawing comparisons with Richard Whiteley.

In 2009 he published a book of that title which mostly concentrates on anecdotes from Soccer Saturday but also has a short chapter on his appointment to Countdown.

On 24 May 2011, Stelling announced that he would leave Countdown at the end of Series 65 in order to focus fully on his Sky commitments. [1] He later said that he would like to stay on the programme. However, on 30 August 2011, Jeff's decision to stay was rejected by Channel 4 bosses, and he left the show. [2]

On 16 November 2011, it was announced that Stelling was to be replaced as host by Nick Hewer, famous for being one of Alan Sugar's assistants on The Apprentice. [3]

Stelling's final episode was broadcast on 16 December 2011. As with Richard Whiteley's final episode, a grand final match went to a tie-break conundrum.

Since leaving Countdown, Stelling hosted the only two series of the ITV quiz show Alphabetical, which launched in 2016.