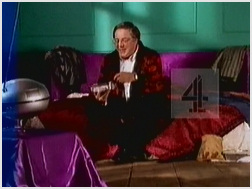 Richard Whiteley watching a movie in his dressing gown. From The TV Room.

Channel 4 is the television channel in the United Kingdom and Ireland that has broadcast Countdown since 2 November 1982. Countdown was the first show on the channel because original chief executive Jeremy Isaacs wanted to start the station with something low-key rather than rushing in with something dazzling (he saved all that for later on in the launch night schedule).

In later years, Channel 4 actually produced a number of station idents with Countdown tie-ins. During the "circles" era there was one with Richard Whiteley holding up a clock and saying "tick... tock... tick... tock...". Then in the "lines" era there were at least three ident variations. In one variation, it showed Richard in his dressing gown, watching Fifteen to One and shouting out the answers. In another variation, it showed Richard watching a movie, in fits of laughter. There was also an ident where Rory Bremner was watching the Countdown opening sequence, trying to impersonate Richard. Finally, there was a short-lived ident in the current style which started with a clip of Des Lynam presenting the show, then pulled back to reveal this was being watched by a young man lounging on a settee, bits of which spun around to reveal the "4" logo.