Des Lynam OBE (born 17 September 1942) was the presenter of Countdown from October 2005 to December 2006. Lynam's tenure spanned from the beginning of Series 54 in 2005 to the end of Series 55 in 2006, including the legendary Championship of Champions XII.

Lynam had previously appeared as a contestant on Series 1 of Celebrity Countdown in 1998, posting a respectable 32 against Siân Lloyd's 17.

After the death of Richard Whiteley, the show took a four-month hiatus, returning on 31 October 2005 with Lynam as the new presenter. Despite the long commute from his home in West Sussex to the studios in Leeds, Lynam proved to be a popular choice with fans. However, he announced in September 2006 that he would stand down as presenter at the end of the year, and was succeeded by Des O'Connor.

Before joining Countdown, Lynam started as a radio presenter, then became the presenter of Match of the Day and Grandstand on the BBC, and later defected to ITV when they bought the rights to show the Premiership. He spent just one year as the host of Countdown, and most recently appeared on adverts advertising Setanta Sports, a now defunct sport channel which broadcast Premiership matches.

Lynam has written an autobiography titled I Should Have Been at Work, published shortly after he took over as host of Countdown.

Lynam returned to Countdown as a Dictionary Corner guest on 26 March 2010, as part of the commemorations held for Countdown's 5,000th episode: he was honoured further with the conundrum DESLHINAM.

Lynam can be seen as host of the Countdown DVD Game, released shortly before his tenure as host ended.

Lynam with Vorderman and Dent: Would you buy a used teapot from these people? 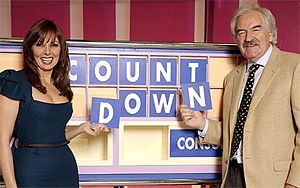