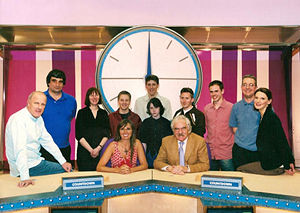 The Series 54 finalists with the presenters and Dictionary Corner. 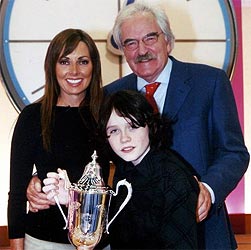 Series 54 began on 31 October 2005, after 120 days off air, and ended on 26 May 2006. The first of two series and a COC hosted by Des Lynam was won by Conor Travers who, aged 14, became the youngest series winner in Countdown history as well as the first recipient of the Richard Whiteley Memorial Trophy.

Series 54 was the longest on record at the time with 153 episodes being filmed due to the passing of Richard Whiteley, which pushed back the series' originally planned starting date of 4 July 2005 by nearly four months (this would later be surpassed by Series 82 in 2020 due to the COVID-19 outbreak). As holding the final in December would have resulted in Series 54 containing only about 30 heats, it was decided that the series would be extended to cover the first half of 2006 as well. It was also decided that a trophy would be made in honour of Whiteley, with all the names of previous series winners engraved.

The opening title sequence was also changed, although the purple and orange cloudy background and logo were retained.

Series 54 featured six octochamps and for the first time ever, three players scored 850 or more during their run.

The show was broadcast at the later time of 3:30pm for this series; due to increased ratings, it was given an extra Saturday show in early 2006 which had varying transmission times, some as late as 4:35pm.

In the finals, Conor Travers thrashed Daniel Peake but Jon Corby had a very tense, close and low scoring game against Christine Armstrong, although he did win. Matthew Shore won his quarter-final by 19 points and Paul Howe beat Keith Maynard in a remarkable game. Howe spotted ISOGAMETE in the first round and after five rounds led 50 – 0. Maynard scored his first points in Round 6 with VAULTED. In the semi-finals, another remarkable game occurred between Travers and Howe. Both players scored all maximums on the letters, also believe to be a unique occurrence, but Travers had the edge in two numbers games which meant that Howe couldn't win on the conundrum. Travers solved the conundrum and won 124 – 100, one of the highest scoring games ever, seven points less than the two games in the Championship of Champions XI that finished 131 – 98 and 120 – 109 respectively. The second semi-final featured much lower scores, but the game was competitive and in the end Shore triumphed 94 – 78 on the crucial conundrum GASPFROWN.

The final was another close, high quality game and Shore beat Travers in one round, but couldn't beat him in any others and eventually was unable to win when it got to the conundrum. The conundrum was INTELIGGE which Shore solved as GELIGNITE to keep Travers to his lowest score (98), but it wasn’t enough to stop Travers from making history.