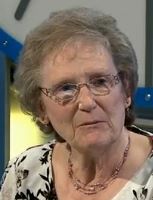 Judy Bursford was a contestant in Series 54 and a finalist in Series 73.

After losing in Series 54 to eventual series champion Conor Travers, Bursford returned in Series 73, winning seven games before losing to fellow finalist Liam Moloney. Qualifying as No. 6 seed, she was defeated by Moloney's vanquisher Stephen Briggs in the quarter-finals.