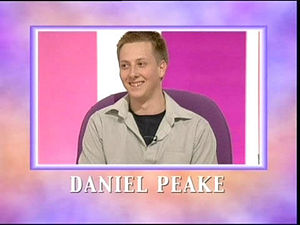 Daniel Peake was a finalist in Series 54.

Peake won 6 games, including a debut score of 103 – the first contestant under Des Lynam to achieve a century – before losing to Ray Oakley by just 8 points. He returned for the series finals as No. 8 seed and faced No. 1 seed Conor Travers, the player that had beaten Oakley. The game went with the seedings as Travers beat Peake by 69 points to end Daniel's Countdown career.

Peake has also appeared at several real-life tournaments, including COLIN 2006, and he was the host of CoBris in 2006 and 2007.

Peake has since appeared on Brainteaser, The Weakest Link, Wogan's Perfect Recall, and Showreel. In 2013, Peake won the top prize of £10,000 on The Common Denominator. He has also served as a question writer for BBC One's Chase the Case.