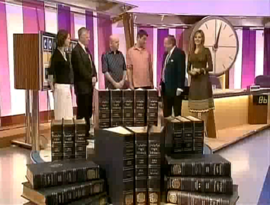 John Mayhew, the series winner with his dictionaries.

Series 53 ran from 4 January to 1 July 2005, and was the last series hosted by Richard Whiteley due to his sad death on 26 June. It was also the first series where Susie Dent was sole lexicographer. It was won by John Mayhew.

Six players qualified for the series' finals as octochamps with very little to choose between the top four players – just 27 points separated them. In the quarter-finals, John Brackstone won a tight but low scoring game against Fred Reynolds, and John Mayhew beat Chris Hunt. Jon O'Neill used all his skill on the numbers to beat Judith Young, and Richard Heald triumphed against Ross Allatt meaning that the top four seeds, three of them with 800 points had made it through. Heald held Brackstone to a crucial conundrum thanks to words like RABBITS and DEMERITS, but it was the No. 1 seed that solved the conundrum in 10 seconds to win the game. No. 2 seed John Mayhew also triumped against O'Neill. Mayhew led by one point after 13 rounds and controversially O'Neill didn't choose four large numbers, which meant it was a crucial conundrum. Neither player could solve EROGENICC meaning that Mayhew won the game by a single point.

With just 11 points separating them, the final promised to be a close game. Mayhew beat Brackstone with TASTEFUL, RELENTS, and UNSEATED, but Brackstone struck back with the second numbers game spot on. The game was poised 76 – 76 going into the conundrum, but neither player managed to solve ARTGENIUS (SIGNATURE). Therefore, a second conundrum was needed, and Mayhew solved LIFEFAIDS in two seconds, and became Countdown's 53rd champion. Brackstone, Mayhew and O'Neill returned for Championship of Champions XII.

The scheduling for the finals week was changed at short notice following Whiteley's death. No edition was shown on 27 June, with the third and fourth quarter finals pushed back by a day. The two semi-finals were then double-billed on 30 June, before Channel 4 cleared its afternoon schedule on 1 July, to show Richard Whiteley: Television Man at 2:30pm, followed by the grand final at 3:15pm, and Mr Countdown: A Tribute to Richard Whiteley at 4:00pm.

An award was given in this series for the best viewer correspondence to John Smith (thus playing into the notion of "all the Johns"), but the intended serial award was retired after Whiteley's death.

NOTE: Due to his offering of zanders ☓ being wrongly allowed in his fourth game, John Mayhew's total should have been 804 points, which would have positioned him third in the seed table below Jon O'Neill by virtue of O'Neill's higher personal best score of 114.
Between Series 38 and Series 59, players were sorted by number of wins, then by number of points. Points from both wins and losses count. Points from sudden death conundrums were not counted, and players with the same number of wins and points were sorted by highest score.