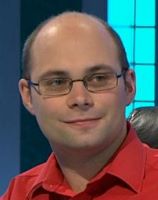 John Hardie was a contestant in Series 53 and an octochamp in Series 73.

Hardie is the 200th octochamp in the history of Countdown, treating viscounts as honorary octochamps. He started his run against former Premier League footballer Matt Le Tissier, followed by a convincing win against Ben Dempster during which he saw the 9 OUTSPREAD. Two more centuries followed before he faced Apterite James Rowan spotting the crucial conundrum SPAWNPEER in under a second. He won three more centuries, spotting the word APTEROUS in his game against Fiona Currie. He won his final games, scoring a century in all but one of them. In the finals, he lost to Matthew Tassier equalling Tassier in all but two rounds, and solved the conundrum RIPEGREEN in under a second but still lost 107 – 122.

Hardie is also a competitive Scrabble player, and qualified for the National Scrabble Championship Finals in 2017.