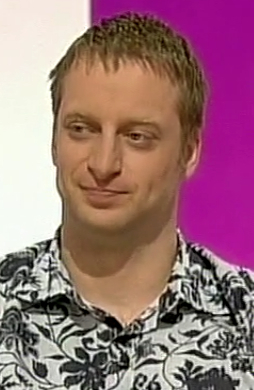 Richard in his quarter-final.

Richard Heald was an octochamp in Series 53.

Heald opened his account with a convincing victory over Amy McMaster on 2 June 2005, completing his run with 4 centuries. Despite scoring 795 points in total, this was only good enough to be #4 seed in the series finals. A nailbiter of a quarter-final saw Heald and Ross Allatt level on 90 points apiece going into the conundrum, which Heald unscrambled on 16 seconds to take a hard-earned semi-final place. Here he faced #1 seed John Brackstone in a match that again went to a crucial conundrum. This time Heald lost out after Brackstone took 10 seconds to unscramble RIPEROOTS.

Heald may have been the reserve contestant for Championship of Champions XII as a nameplate with his name on was seen on the monitor next to the tile-shuffling table to the side of the audience, but this is unconfirmed.

Heald was the last octochamp to be crowned with Richard Whiteley as the presenter. He is also notably the 15-round octochamp who has had the fewest nine-letter words available in his run; only one was available to him (namely, OUTRANGES in his second game), and he spotted it.