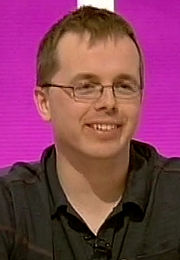 Ross in his quarter-final.

Ross Allatt is an octochamp from Series 53.

After defeating Mansoor Ditta on 14 April 2005 on a crucial conundrum, Allatt achieved octochamp status after 6 relatively comfortable wins and 1 battle royal against David Hutton in the 4th game. 740 points in total meant Allatt returned for the series finals as the #5 seed. He produced a classic game against #4 seed Richard Heald, with whoever getting the conundrum being guaranteed a century and a place in the semi-finals. Heald triumphed after half the time elapsed, leaving Allatt as an unlucky loser.

Allatt returned to Countdown the following year, to compete in COLIN 2006, and later appeared at CoLei 2008.

Retrieved from "https://wiki.apterous.org/Ross_Allatt"
Categories: Finalists | Octochamps of the 15 round era | Contestants in Series 53 | Teapot owners