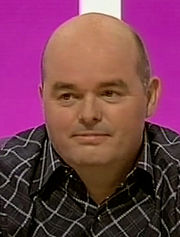 John in the Series 53 grand final.

John Brackstone was an octochamp in and the runner-up of Series 53.

He first appeared on 12 May 2005, beating Caroline Ambrose 115 – 73, before winning seven more games to become an octochamp and the #1 seed of Series 53. He beat Fred Reynolds and Richard Heald on his way to the grand final, where he lost to John Mayhew after a second crucial conundrum.

He later returned for Championship of Champions XII, beating David Wilson in the first round before succumbing to Conor Travers in the quarter-finals, losing 101 – 80.

In 2015, Brackstone returned to play a special episode against Graham Nash, which he lost 94 – 49.

* includes 10 points from a tie-break conundrum
Retrieved from "https://wiki.apterous.org/John_Brackstone"
Categories: Finalists | Octochamps of the 15 round era | Contestants in Series 53 | Contestants in Championship of Champions XII | Teapot owners